In 21 days, I will be moving back to the Promised Land, into a house with three other girls. And I am SO EXCITED. Since I’m transitioning from the dorm to a real house, I’ve changed things up a little bit, including the color scheme of my room. You may remember that I went with a beach theme in the dorm, light blues, greens, coral, etc. This time around, I’ve decided to go with light blue, gray, and dark purple. I’ve been able to keep a lot of my blue stuff, like my bedspread, pictures, lamps, and pillows. I’ve also decided to re-do a couple of things I already had. I didn’t want to part with some of it, and I still needed some, so instead of spending lots of money on buying new things, I spent a little money on updating them! One of the things I had that I absolutely loved and did not want to get rid of was a memory board my aunt made for me. I love pictures, so I obviously can’t do without one of these. The only problem was that it was lime green, which totally doesn’t match my room anymore. So I got some new fabric & ribbon, and an hour or so later, I had an updated version of one of my dorm room faves!

Here’s what you will need:
-1 memory board (Mine is made out of one of those posterboards with the foam and a thin layer of cotton quilt batting. If you have one you bought from somewhere, you could still try this, but it will probably be more difficult to take apart, but I have faith in you. Just don’t injure yourself. OR if you want to make one, just get one of the posterboards mentioned above & some quilt batting!)
– Enough fabric to cover the front of the board. I used 1/2 of a yard, and have plenty left over to make pillows with!
-Ribbon. I just used one spool, but I probably should have used two.
-Brads, furniture tacks, or buttons. I used some really cute brads from the scrapbooking section in Hobby Lobby.

Here’s what you do:

1. First, remove all the buttons or tacks from the board. Mine were buttons, so it was fairly easy to just cut them off, but if yours has tacks, it might be a little harder.
2. Second, using a staple-puller, flat screwdriver (what I used), scissors, or your fingernails (which I wouldn’t reccommend, then they’ll look like crap), remove the ribbon. Make sure you don’t accidentally remove the staples that are holding down the fabric, just the ribbon! 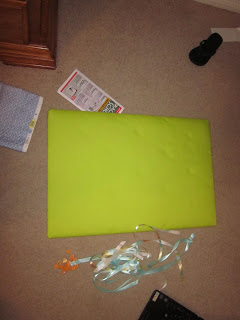 3. Next, measure and cut the fabric. I did this by laying the fabric print-side down on the floor and laying the board fabric-side down on top of it. Then I cut it, leaving enough fabric on each side to overlap & staple down on the back. Also, make sure you iron your fabric before you staple it, because wrinkles are ugly, and that it’s pulled really tight, because it will also be ugly if it’s loose.

4. Now you’re ready to staple! Make sure that the fabric is tight, and if it has a pattern that the pattern is straight. I folded the edge of mine twice and then stapled it. I used just a regular stapler, because I wasn’t sure if heavy duty staples would have gone through the front. This part takes the longest, but it’s not hard! Just make sure that every staple gets in there like it’s supposed to, or else it won’t hold together very well. Keep going all the way around! I would suggest using extra staples on the corners, since you’ll probably have more fabric there.

5. Ribbon time! Take the end of your ribbon and staple it on the back of the board, diagonally through the center of the point on the corner.

6. Next, stretch the ribbon diagonally across the board, making sure it’s tight and straight. Staple the end to the back side of the opposite corner from which you started.

7. Do the same thing on the opposite corners.

8. Continue adding ribbon to make more small diamonds. I measured the distance from the middle to make sure I spaced them evenly.

9. Now it’s time for the brads/buttons/whatever. Like I said, I used brads from the scrapbooking section, but if you want to use buttons or something more sturdy, that would probably be wise.

10. Poke a hole where you want the brad to go, usually in the middle of where the two ribbons cross. My brads didn’t go all the way through all the layers, so I used a nail and my brute strength to push it through.

11. Take your hole-poking tool out and replace it with the brad. Secure it on the back by folding the prongs down.

12. Repeat for each ribbon intersection! I used a different brad for each one, and it turned out super cutie!

So there it is! This was super easy and inexpensive, and I can’t wait to put it up in my room and fill it with pictures! I have a few more DIY’s coming soon, and hopefully I’ll be able to do another recipe before I leave for school! Until next time!

Hey Cats!
So, as you know, I recently went on a trip to New York, and I’m ready to pack my bags and go right now. I’m not one to buy souvenirs on trips, or at least souvenirs that have anything to do with where I am. I usually just go shopping and whenever I wear something, I’m like, “Oh, I remember when I bought this in D.C.” and that brings back great memories. In my opinion, it’s a waste of money to buy crap like a statue of the Empire State Building that I’ll just sit somewhere and let collect dust. (Or I’ll break it. That happens a lot.) It’s much more practical to buy something you’ll wear a lot, and it’s still a great reminder of the fun time you had on your trip. At least that’s how I justify it. (Also, I think coffee mugs are a nice practical souvenir. You always need those!). In addition to my rampant spending spree in Chinatown, (I literally threw nearly $100 at pushy Asian people in less than ten minutes. It was INTENSE) I bought one of the classic American tourist pieces. Yes, that’s right. I bought an “I ❤ NY tee. We all did, because we were going to pull an Ultimate Tourist Move and wear them all to the airport when we left. Also, I’m not going to lie, I’ve secretly wanted one all of my life. So I bought it. They’re like, $3 at every single gift shop in the Big Apple, so it wasn’t like I was squandering a chunk of money on a splatter-painted “I ❤ DC” sweatshirt. (Yes, I did that one time. I don’t want to talk about it. I wear it indoors and on snow days under a big jacket only). However, once I got home, I had to be real with myself. I was never going to wear that shirt again. So, not wanting to waste my $3, or one of my only true souvenirs, I decided to give it a little update. T-shirt DIY’s are all over Pinterest, so I found one I liked, grabbed my scissors, and ended up with this little gem: 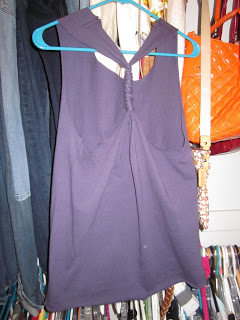 Since I didn’t take pictures during the process, and because I don’t want to write out all the instructions, I’ll just direct you to the link I used.
http://blogilates.com/printables-2/diy-racerback-workout-shirt-tutorial
I followed the directions for the most part, except for the hi-low hem, because it was already kind of short. It’s not perfect, but like I always say, it adds character and makes it unique. It’s a great pool shirt and workout shirt, if you work out. I don’t. But if I ever do, maybe I’ll wear this. Anyways, it’s a great option for making a tourist tee a little less tacky, or for an awkwardly-fitting shirt you don’t want to throw away. Also, just a tip: One of the girls told us when we purchased the shirts not to dry it in the dryer, because the letters would melt off. I would heed this advice, because I washed mine & hung it to dry, and the letters are already wrinkly and kind of merrr looking. Anyways, I hope you’ll try this with a tourist tee, or any other tee you may have lying around! I’m working on multiple crafts for my new house, and I’m excited to finish them and share them with you! Also, I have a special suprise project I’m working on, but I can’t tell you about that for a while. I might not actually finish it…. But anyways, until next time!